As COVID-19 Crashes the Economy, Workers and Business Owners Wonder If Anything Can Save Them From Financial Ruin

Views expressed in this article is the opinion of the author, and does not necessarily reflect the view of the Institute of Strategic and International Studies (ISIS) Malaysia and the other individuals/organisations cited

The new SARS-CoV-2 virus, which causes the disease COVID-19, first arrived on Malaysian shores on 25 January 2020. A month later in February, case numbers inched up to 22 positive cases. By mid-March, case numbers had ballooned 20-fold to 428 cases. In response, Malaysian authorities issued a two-week Movement Control Order (MCO) on 18 March 2020. Businesses and services deemed to be non-essential were shut down. Interstate travel was curtailed. Public sporting, religious events and gatherings were cancelled. 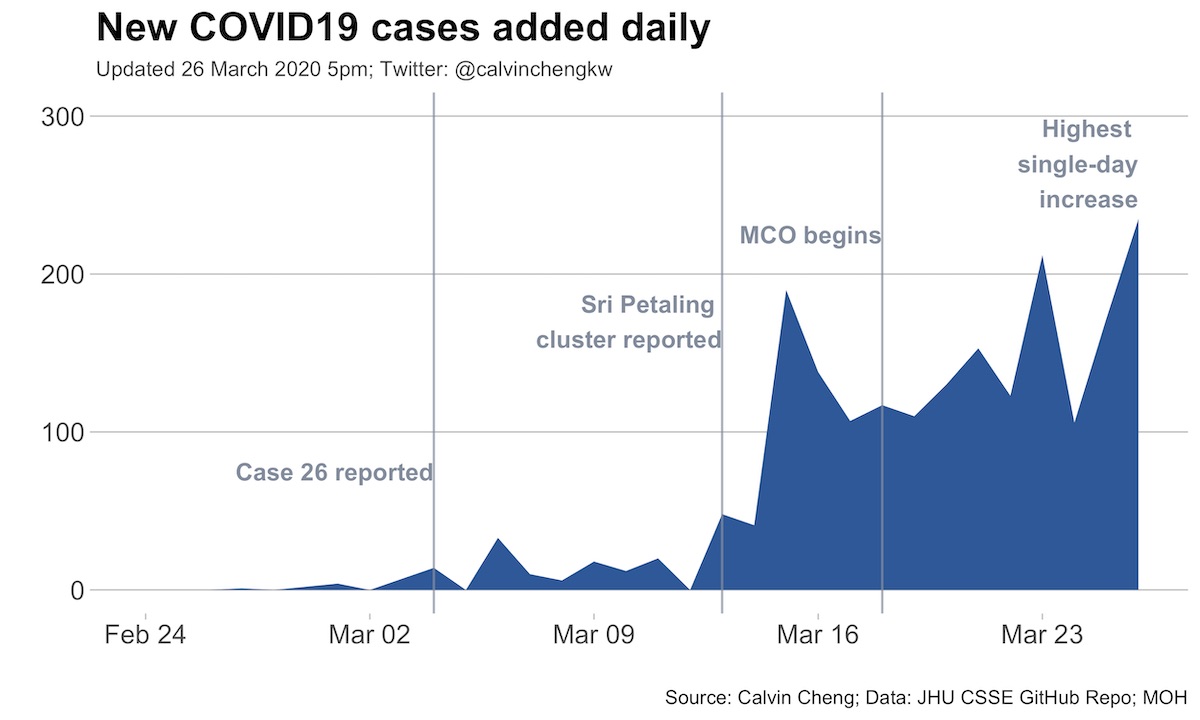 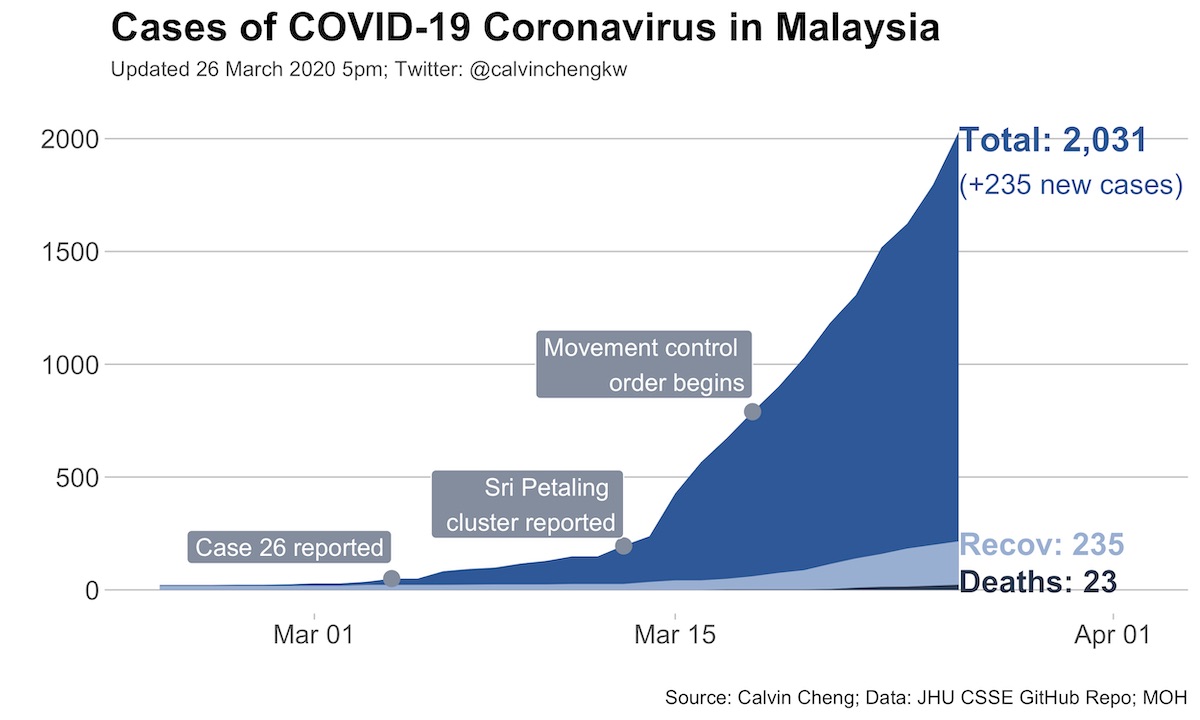 By now, it is clear that this pandemic will have intensely damaging effects on both the Malaysian macroeconomy as well as on the economic welfare of the rakyat. The main sources of economic damage in Malaysia are twofold: the first is the knock-on effect from the impacts of the coronavirus abroad, the second is generated domestically due to the newly-imposed movement control measures.

First, long before the partial lockdown measures in Malaysia, the outbreak of the new coronavirus in China had created wide-ranging supply and demand shocks that have reverberated across the globe. Commodity exporters around the world braved lower prices as Chinese demand collapsed, while global manufacturers faced production cuts as Chinese factories are locked down.

In Malaysia, the effects of these China shocks may be dire. The Malaysian economy is amongst the most highly exposed economies in the region to both Chinese demand and supply. China is Malaysia’s number one trading partner, a large source of foreign investments, and its top tourist source outside of ASEAN.

Additionally, over the past decade, Malaysian firms have become amongst the most deeply integrated in the global production networks. This is compounded by the fact that regional supply chains have become increasingly China-centric. Indeed, more than a quarter of Malaysia-China trade (about US$20 billion in 2018) is made up of intermediate components–exactly the kind of products that gets affected the most when global supply chains are disrupted.

Second, the MCO measures, while absolutely essential in impeding the outbreak of the new coronavirus in Malaysia, will have devastating economic costs too.

On a macro level, the closure of businesses and services, along with the travel and movement controls will have outsized impacts on private consumption and business investment. Its adverse effects on individual livelihoods and businesses will be even more pernicious. Individuals and businesses affected by the temporary closures will be at high risk of facing immediate cash flow constraints as their earnings dwindle.

Critically, this liquidity squeeze will be disproportionately felt by small-and-medium enterprises (SMEs), and vulnerable groups such as lower-income individuals, and part-time and unemployed workers. This can have knock-on effects on the entire economy–leaving businesses insolvent, individuals bankrupt, and the financial system saddled with non-performing loans.

Unlike the global financial crisis in 2008, and the Asian financial crisis in 1997, Malaysia’s COVID-19 crisis is a public health crisis first, and an economic crisis second. Following this, economists generally agree that economic policy should focus mainly on bolstering public health efforts in handling the pandemic whilst ensuring the welfare of the rakyat and businesses.

The RM20 billion stimulus package announced in February is a good start and already contains many of the measures proposed here, but in light of the recent developments and the severity of the crisis, there is a sense that the package can be much larger. Indeed, when the February stimulus package was announced, there were 23 confirmed cases of COVID19. At time of writing, there are now 1,792 confirmed cases–a 78-fold increase.

For comparison, the stimulus packages unveiled during the Global Financial Crisis in 2008-2009 amounted to RM67 billion (or 8.4 per cent of GDP)–more than three times larger than the planned RM20 billion (only about 1.4 per cent of GDP). As such, many analysts note that there is an urgent need for a second add-on package, especially if movement controls are extended, to strengthen and broaden many of the initiatives in the February stimulus package.

Broadly, Malaysia’s economic policy response to the coronavirus pandemic should comprise two separate stages. Stage one measures should be implemented when quarantine/partial lockdown measures are imposed to safeguard the income and liquidity of affected businesses and individuals. Stage two measures should comprise a hefty fiscal stimulus component and should be implemented as soon as the outbreak shows signs of subsiding and movement controls are lifted.

Stage one measures should primarily involve supporting the welfare of the rakyat through income and liquidity support. As economists Steven Hamilton and Stan Veuger note, this would enable individuals and businesses to temporarily suspend work without adverse impacts on their ability to remain solvent. As much as possible, the goal should be to allow them to be able to pick up where they left off after the pandemic subsides.

For individuals, stage one measures should primarily aim to cushion the impact of the outbreak on the livelihoods of the rakyat–particularly vulnerable groups such as the lower-income and the unemployed, and part-time/gig economy workers.

On this, there is a need for an expansion and temporary extension of unemployment insurance, especially the Job Search Allowance (JSA) component under PERKESO’s EIS mechanism. Under this expansion plan, individuals currently receiving EIS benefits should receive a temporary freeze in their maximum six-month period benefit eligibility period for as long as the movement control measures are in place.

Additionally, the JSA benefit amount should be supplemented by a temporary special provision to increase the amount transferred, increasing the income replacement rates for unemployed recipients. This would enable the unemployed to weather cash flow shocks for longer whilst remaining ready to resume job search after the outbreak subsides. Lastly, broadening existing coverage of the EIS would also be hugely beneficial. PERKESO’s SIP plus 600 initiative, which relaxes eligibility conditions for the receipt of temporary benefits, is a commendable attempt at this.

In normal times, the EIS is primarily funded by a tax on workers’ paychecks, but in times of crisis, this proposed temporary extension and expansion of EIS benefits would need to be briefly funded by the federal government for as long as the pandemic remains a national crisis–akin to economist Arindrajit Dube’s plan in the US. A major obstacle to this expansion proposal may be a need to amend or circumvent the Employment Insurance System Act 2017.

For workers forced to take unpaid leave, PERKESO’s newly announced Employment Retention Program (ERP) is a great start. Nonetheless, as Christopher Choong from Khazanah Research Institute (KRI) has noted, the current ERP amount of RM600 is broadly insufficient, constituting only about 26 per cent of the median wage (using 2018 data). Instead, incentivising employers to keep paying workers via conditional credit lines for large firms or via matching wage assistance policies are needed.

Outside of the labour force, direct cash flow support via BSH should be increased to reach low-income households who may not be formally employed or are unable to work. Similarly to the ERP, current plans under the fiscal stimulus package to increase annual BSH payments by only RM150 per household will be inadequate, representing only about a 10 per cent increase compared to the normal BSH annual benefits. Here, a one-off increase in the BSH transfer amount for the poorest households would enable communities to purchase necessities during the movement controls.

For businesses, the primary aim of stage one measures should be to reduce the number of business deaths from the outbreak. UC Berkeley Professor Pierre-Olivier Gourinchas makes the point in a recent article that the permanent closure of a business destroys jobs and creates negative spillover effects on other businesses along the supply chain.

On this, affected businesses will need cash flow support to allow them to remain solvent during periods of reduced demand and allow them sufficient liquidity to continue paying their workers. This will need to include measures similar to the recently announced Bank Negara Malaysia Special Relief Facility, but with higher amount, lower interest rate, and a longer repayment tenure–particularly to SMEs who are most susceptible to cash flow pressures. Large firms heavily affected by the outbreak may require access to emergency credit lines, which can be made conditional on the fact that the firm retains its payroll full-time throughout the crisis period.

Additionally, this can be coupled with cost-relieving measures for businesses like deferment on tax and utilities payments. Some of these measures to support businesses are already included in the planned fiscal stimulus package–but to be more effective, they need to be extended to sectors outside of tourism.

Subsequently, once the pandemic has passed its peak and movement controls are lifted, stage two measures need to kick in immediately. Stage two measures can complement stage one measures by adding in an expansionary component with the primary aim of helping the businesses and individuals bounce back. Economic policy should now shift gears to focus on boosting the economy via proactive fiscal stimulus.

Stage two measures should encompass an expansion of the main proposals contained in the government’s earlier RM20 billion planned fiscal stimulus package, including measures to increase infrastructure spending and broaden personal tax relief. In general, past experience suggests that successful fiscal stimulus should consist of a multi-pronged approach in one single package, from the immediate-term to the longer-term.

For the immediate-term, a simple one-time cash injection to every Malaysian, structured as a fully-refundable lump-sum tax rebate would put money in the hands of the rakyat almost immediately, rapidly kickstarting aggregate demand. Research suggests that such cash injections work much quicker in getting money into the real economy compared to things like corporate tax cuts.

For the medium-and-longer-term, periods of crises present good opportunities to increase productivity-improving expenditure and invest in deepening social safety nets. Increasing infrastructure spending, especially in lagging regions as proposed in the February stimulus package can have long-term effects on productivity and economic growth. Similarly, continuing to deepen social safety net and strengthen automatic stabilizers like the EIS will both incentivise human capital accumulation and ensure both the Malaysian economy and Malaysian workers are better prepared for future crises.

Certainly, none of this will be easy. For starters, it will be costly. Government budget deficit targets will need to be overshot. Difficult decisions will need to be made later on how to boost tax revenues–though as Emmanuel Saez and Gabriel Zucman observe, with progressive income and wealth taxes these costs need not be borne by the middle or lower classes.

Additionally, intense amounts of political determination will be required. As mentioned above, some policy responses may require the circumvention or amendment of certain laws via a special or emergency parliamentary session (see: restrictions on government borrowing to fund operational expenditures, and restrictions via the Employment Insurance System Act). Lastly, there will be huge financial pressures on the banking sector, demanding action from our monetary policymakers.

Besides, even with comprehensive and valiant efforts at cushioning the blow to the rakyat and businesses, some amount of job losses and business closures will be unavoidable. Yet, the economic, social and political cost of inaction–or even insufficient action–is far greater and far more frightening. Surely, this is no time to be timid. In light of the emerging risks, it is clear that the fiscal policy needs to go further beyond the February stimulus package in safeguarding the livelihoods of the rakyat.

After all, the current COVID-19 crisis will eventually be conquered through vigorous public health efforts, but without a sufficiently large and forceful fiscal response, the economic scars it leaves behind will be viciously long-lasting.